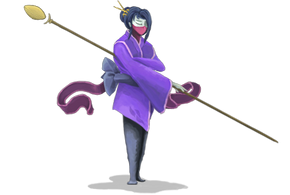 "A blind ascetic who has come to "Evaluate" the Spire. Master of the divine Stances."

The Watcher is one of four playable characters in Slay the Spire. She is a monk that utilizes the effects of her different stances to her advantage, boasts an arsenal oriented around deck control via scrying and/or

retaining, and possesses the unique strategy of cards generation. She starts with 72 HP.

The Watcher's starting Relic is

Pure Water, which adds a Miracle 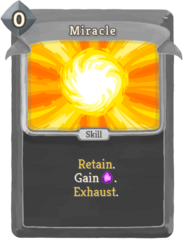 to your hand at the start of each combat.

The Watcher is first added to the beta build in the Testing the Fourth Character update and released to the public on January 14th, 2020.

The Watcher is unlocked by completing a run with any character (defeating Act 3 boss) while having the Defect unlocked.

Retrieved from "https://slay-the-spire.fandom.com/wiki/Watcher?oldid=15925"
Community content is available under CC-BY-SA unless otherwise noted.