The Silent is one of three playable characters in Slay the Spire. She is themed on a rogue fantasy build.

The Silent's starting Relic is Ring of the Snake: Draw 2 additional Cards when starting combat.

Unlike the Ironclad, the Silent does not get any healing whenever she finishes combat. Therefore she is often more focused on

Block, and gaining explosive advantage so that she can end the encounter faster. Many of her cards give additional Energy and card draw, allowing her to chain momentum together to overcome the lack of built-in healing.

The Silent's starting deck is the largest of the 3 characters, at 12 cards, compared to Ironclad's and Defect's starting deck, both of which have 10 cards. This means more Strikes and Defends are encountered in Act 1, and it's slightly more difficult to remove all starting cards from The Silent's Deck.

The Silent's starting deck is also the cheapest, with it's 2 non-Strike non-Defend cards costing 1 and 0. This means it's easier to take strong 2-damage card options earlier in the game, such as Dash 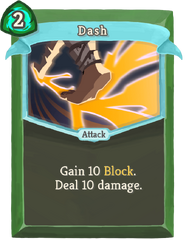 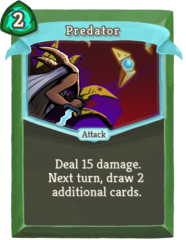 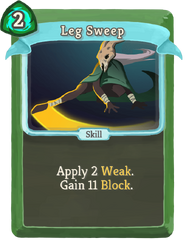 Ring of the Snake, ensures that the first turn of every fight is slightly stronger than all of the other turns. This makes Innate cards slightly better for Silent since they only take up 1 of 7 cards instead of 1 of 5 cards.

These are the standard types of decks that may give you an idea of direction for your deck, or what you want to go for. Keep in mind that none of these builds are mutually exclusive. Many of them are more of a general strategy, which can be adapted or combined into multiple builds in a single deck

Block builds revolve around playing defensively. This means drafting a smaller deck than usual, and focusing on getting enough block to block all damage every turn. The combat is then stalled out until a decks win condition is met.

Poison Builds use poison stacks as their main source of damage. With the right cards, you can ramp up poison stacks on an enemy very quickly and kill them in 1-2 turns. However, the usual style of poison builds slowly ramp up stacks over time and whittle the enemy down over many turns.

- Extremely strong for poison decks, this simply just gives more poison to your existing poison cards. You get the best value from this using poison sources that give small stacks of poision at a time: namely, Noxious Fumes 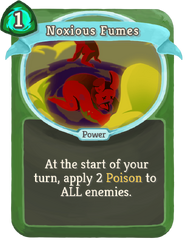 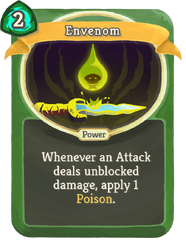 The Specimen - gives poison decks much-needed AOE damage. This is a must-have if you encounter this relic after you have committed to making a poison deck.

This build aims to cycle through your deck quickly to find the key cards needed to finish the fight.

A primarily damage-focused build that revolves around gaining and using many Shivs during each combat. The Silent also has a few Relics that are specifically for enhancing Shivs. 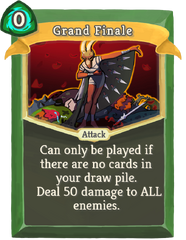 Grand Finale is a combo deck, and requires most or all of the deck to be built around it to work. Also there are a few cards needed specifically to make it work.

The Silent seen in the Launch Trailer alongside the Ironclad and the Defect
Add a photo to this gallery
Retrieved from "https://slay-the-spire.fandom.com/wiki/Silent?oldid=11373"
Community content is available under CC-BY-SA unless otherwise noted.