Orbs is a mechanic used by The Defect, one of the playable characters. The Defect begins with 3 Orb Slots that can store elemental spheres. Each spheres will activate their passive effect each turn or Evoke them for an active burst.

The Defect begins with three Orb slots and considers the right most Orb to be the active Orb. Other classes have a hidden starting limit of Channeled Orbs of 1. They will display Orb slots if they have an Orb-related card in their deck.

Player can increase and decrease the number of Orb Slots by playing cards or under effect of relics. Losing a slot with an Orb equipped does not Evoke it. A character can have at most 10 Slots. If a character has 0 Slots, Orbs can no longer by Channeled. Orb Slots do not carry over between combats.

Channeling an Orb inserts it into the rightmost empty slot. If every slot is full, each Orb will be shifted one slot to the right, popping active Orb out of its slot and Evoking it.

At the end of The Defect's turn, it uses the passive effect of channeled orbs, left to right. The effect of these orbs can be increased by gaining the Focus buff.

Evoking an Orb shatters it and unleashes a high-powered effect. Unlike passive effects, Evoking an Orb activates instantly. Orbs can be Evoked by channeling too many Orbs or cards that specify Evoking them. After Evoking an Orb, each Orb to its left shifts to fill its slot.

Focus is a stat unique to The Defect that affects Orbs the same way Strength affects Attacks and Dexterity affects Block. Increasing Focus increases the magnitude of both the passive and Evoke effects of each Orb (except for Plasma Orbs). It is possible to reduce Orb effects to 0 by decreasing Focus.

There are currently four types of Orbs - Lightning, Frost, Dark, and Plasma. The X in each description refers to the Focus stat.

Lightning Orbs are straightforward damage-dealers that chip away at enemies' Health each turn and Evoke a big damage burst. Lightning Orbs' passives activate at the end of the player's turn, before the enemy's Block has worn off. This means it can't bypass Block, but it can push through some sneaky finishing damage if sufficiently worn down beforehand.

The random nature of these Orbs spreads the pain around, so reducing enemy numbers with Attack cards to focus the Lightning damage onto the most dangerous enemy is an ideal strategy. Alternatively, Electrodynamics 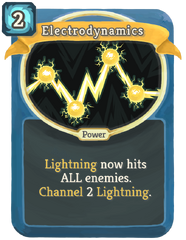 will apply Lightning damage to all foes, allowing you to take on groups of foes effectively.

When building a Lightning deck, plan whether the Orbs' passive or their Evoke will deal the bulk of your damage. Increase your Focus and add more Orb slots to maximize the passive damage, or reduce Orb slots and add more Channel effects to Evoke more often. Trying to do both can make the deck inconsistent and unable to handle high-health enemies.

The damage dealt by Lightning is not affected by any effects except Focus, Intangible and Lock-On. It's not reduced by Weak, isn't increased by Vulnerable, ignores Strength and Thorns, and doesn't count as Attack damage for effects like Angry.

Frost Orbs are defensive tools that provide a small but relevant defense each turn and Evoke to counter stronger blows. Frost Orbs' passives activate at the end of the player's turn, but after effects like Orichalcum have triggered.

At the beginning of combat, Frost Orbs are the weakest of the bunch, the Block too minor to counter even feeble attacks. However, once The Defect has Channeled a few copies and boosted Focus, they form a line of defense that few enemies can penetrate, and regenerate it turn after turn.

When building a Frost deck, the challenge is surviving the early game until your Frost Orbs can fully defend you. One option is to bolster them with Skills that grant Block, accepting that those Skills will become useless once your Frost defenses are prepared. Another option is to simply tank the early-game damage and recover with Self Repair 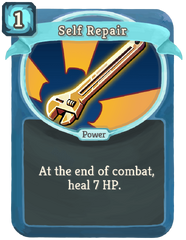 The Block granted by Frost isn't affected by Dexterity or Frail, which makes it particularly strong against enemies that use such effects to proactively reduce Block. The repeatable card-free Block is also relevant against Gremlin Nob and Chosen.

Evoke: Deal Y Damage to the enemy with the lowest Health.

Dark Orbs are beatsticks that trade Lightning's reliable damage for a bigger Evoke effect. The Dark Orb's passive has no effect on combat at all, and only serves to stockpile damage into the Evoke ability. Dark Orbs' passives activate at the end of the player's turn.

Dark Orbs are the most challenging Orb to build around. The Defect must Channel the Orb early, survive while it charges, and Evoke it at the appropriate time. The Dark Orb gains less from Focus than other Orbs - it's generally smarter to simply charge it for a few more turns. However, the payoff is massive damage that's more predictable than that of a Lightning Orb.

The key to mastering the Dark Orb is ensuring it can be Evoked at the right time, onto the right enemy. Dark Orb decks demand a high number of Evoke cards, and benefit the most from multi-Evoke cards like Multi-Cast 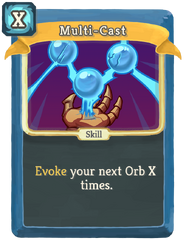 that can multiply the hard-won damage. If evoked with Recursion, the channeled Dark Orb will retain the stockpiled damage. Use reliable Attacks like Melter 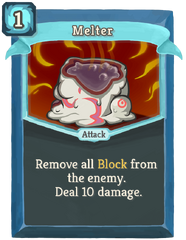 to groom enemies' HP so the Evoked damage can land on a key target. Try to Evoke Cracked Core's Lightning Orb as soon as possible, so the Dark Orb is ready for action.

A key decision in Dark deck construction is how many Orb slots to maintain. Increasing the count allows the player to charge more Dark Orbs at once, but reducing it makes it easier for Channel effects to Evoke them. In either case, minimize the number of Channel effects in the deck to avoid prematurely Evoking Orbs.

Like Lightning Orbs, Dark Orbs' damage is affected only by Focus, Intangible and Lock-On.

Plasma Orbs grant Energy. This simple effect powers greedy decks loaded with impractically-costed, absurdly powerful cards and fuels long chains of huge plays. Unlike other Orbs, Plasma Orbs are unaffected by Focus, and their passive effects trigger at the beginning of The Defect's turn.

A single Plasma Orb is a significant boon to The Defect, like a Velvet Choker with no downside. The key is making the most of the extra Energy without Evoking the Orb and losing the passive. Alternately, the Orb can be Evoked at the right time to access the 2 Energy and fuel a huge turn.

When The Defect can Channel multiple Plasma Orbs, the challenge is simply spending all the Energy. This is the time to jam all the Meteor Strikes 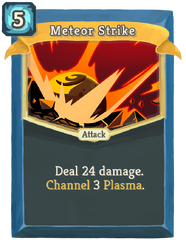 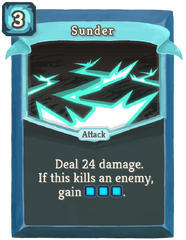 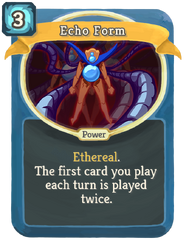 , and other flashy bombs that are too pricey for more sensible decks. There's nothing more satisfying than sinking a dozen Energy into a massive game-ending Tempest 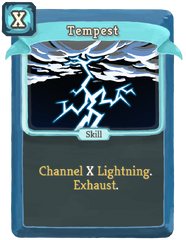 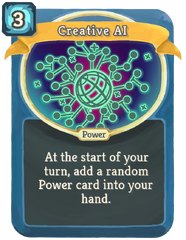 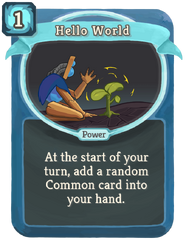 , and other repeatable card-draw and card-generation effects are great ways to dump excess Energy, and Unceasing Top becomes hilariously overpowered. Draw effects in general are quite good with Plasma Orbs, especially if the deck is likely to Evoke them.

As seen in the Fusion card art, Plasma Orb seems to be created from the fusion of the three other orbs.

Retrieved from "https://slay-the-spire.fandom.com/wiki/Orbs?oldid=18820"
Community content is available under CC-BY-SA unless otherwise noted.