Edit
watch 03:01
Wiki Targeted (Games)
Do you like this video?
Play Sound 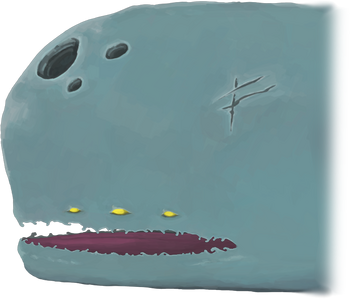 Neow is an NPC in Slay the Spire. She is a big, whale-like creature with light blue skin and three pairs of bright yellow eyes. Neow lies at the foot of The Spire and welcomes the player to every run.

Neow blesses adventurers with rewards based on their previous success, offering gold, relics, or cards, unless they failed to reach the Boss of the Exordium, in which case she offers only two options instead of the usual four, and one of them is the aptly named relic

Neow's Lament. It weakens the monsters in the first few encounters in the Spire to 1 HP, sometimes even giving the adventurer a free shot at an elite monster.

If you failed to reach the Boss of the Exordium in your last run, the Blessings you can have are:

The third Blessing is a composite of one disadvantage and a better reward. It can be a combination of any disadvantages and rewards below, with exceptions noted:

The last Blessing offered will always be: