Edit
watch 02:56
Raise a Floppa - The Loop
Do you like this video?
Play Sound

There will always be 2 Attack cards, 2 Skill cards, and 1 Power card.

One of the cards will always be On Sale, reducing its cost by 50%.

There will always be an uncommon Colorless card on the left, and a rare one on the right.

The Relic on the right will always be a Shop Relic. This is the only source of Shop Relics.

The Merchant is a blue skinned man sitting on a blue-green rug next to some cards, a small chest, a bag, and a knife. He is wearing a mask covering his face (similar to the

Smiling Mask Relic) and a blue cloak. He is friendly towards the player, if not a little rude and brash, and talks to them while they view and purchase his wares, mostly small talk, or statements revealing his greed. 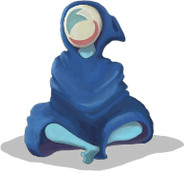