Heel Hook is an Uncommon Attack for The Silent that effectively deals "free" damage if an enemy is Weak. Upgrading Heel Hook increases the damage from 5 to 8. It's Silent's version of Dropkick 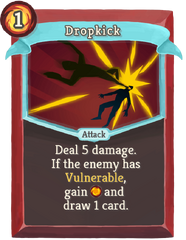 Heel Hook is generally a poor choice. Without a Weak enemy, it's an even less effective Strike. In the best case, it's a slightly stronger Flash of Steel.

To make the most of Heel Hook, ensure that at least one enemy can remain consistently Weak, and use a small deck to increase the chances of chaining one Heel Hook into another.

Generally, you should look for more powerful and consistent Attacks instead of picking Heel Hook.

The card becomes stronger with A Thousand Cuts, Envenom, and other cards that encourage playing many cards each turn.

Reducing Heel Hook's cost to 0 using Madness, Mummified Hand, or similar effect will gain you one Energy, increasing the odds of your being able to play the card you just drew.

Retrieved from "https://slay-the-spire.fandom.com/wiki/Heel_Hook?oldid=12249"
Community content is available under CC-BY-SA unless otherwise noted.