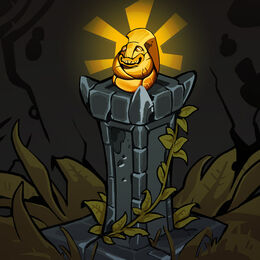 Golden Idol is an event found exclusively in Act 1. The player can claim the powerful

Golden Idol for a price, or safely walk by.

Numbers in parentheses are for Ascension 15 or higher.

Golden Idol. Trigger a trap, sending a huge boulder rolling towards the player.

Golden Idol is used for Events in future Acts. It's also a strong Relic in its own right, granting 25% more Gold from battles. It's generally a good idea to [Take] it.

[Smash] option is usually the best choice. The Act 1 enemies and Bosses aren't particularly powerful; unless the player has an Elites blocking their way, the 25% damage is probably irrelevant.

[Outrun] is also a good choice. Injury is annoying but not game-breaking, and the extra Gold granted by the Relic will offset the cost of paying the Merchant to remove the Curse.

Sacrificing max HP via [Hide] is possibly the most dangerous - dropping below 50 HP allows many Bosses to kill the player in one attack.

Retrieved from "https://slay-the-spire.fandom.com/wiki/Golden_Idol_(Event)?oldid=20715"
Community content is available under CC-BY-SA unless otherwise noted.