Distraction is a rare Skill for The Silent that generates a random Skill and reduces its cost to 0 for the turn. It's Silent's version of Infernal Blade 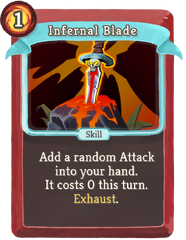 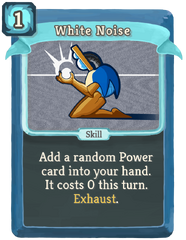 . Upgrading Distraction decreases its cost to 0. It can not generate healing skills, namely Alchemize 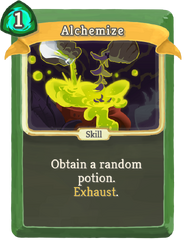 Distraction is almost always a low-powered card. The Silent has many Skills that are weak on their own but powerful in combination, so the Skill you get is unlikely to perform at full strength. Worse, The Silent has many 0-cost Skills like Setup that actually waste your Energy.

If you're desperate for Block and defensive Skills, then Distraction could be your only option. Otherwise, you're better off skipping the pick and instead picking a Skill you actually want.

Distraction synergizes with effects like Choke, Panache, and A Thousand Cuts that count the number of cards played.

Retrieved from "https://slay-the-spire.fandom.com/wiki/Distraction?oldid=12248"
Community content is available under CC-BY-SA unless otherwise noted.