Deal 10 damage to ALL enemies.

Deal 14 damage to ALL enemies. 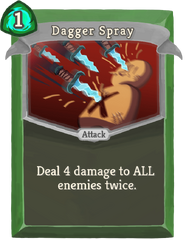 , upgraded or otherwise. It scales with

Strength worse than the latter, given that All-Out Attack hit only once. However, due to the same reason, it is less punishing to use against enemy with

With its discard being random in nature, it is highly preferable to use all the other high-impact cards before using this card as a sort of 'closer' cards to make it less likely to discard a card that you actually want to play.

Retrieved from "https://slay-the-spire.fandom.com/wiki/All-Out_Attack?oldid=16154"
Community content is available under CC-BY-SA unless otherwise noted.