Your first attack each combat deals 8

The Akabeko is a common relic that makes the first attack played each combat deal an additional 8 damage.

Akabeko is essentially a hefty 1-attack

Strength boost. This card benefits multihit cards, such as Pummel 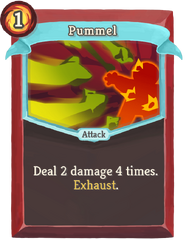 and Ragnarok, as the additional damage is applied to each attack done by the card.

Retrieved from "https://slay-the-spire.fandom.com/wiki/Akabeko?oldid=18914"
Community content is available under CC-BY-SA unless otherwise noted.