A Note For Yourself is an uncommon Event found in the first three acts of the Spire. It is a unique event because it carries cards between runs; it gives you a card and requires you to store one(thus removing it from your deck), then giving you the card you stored next time you encounter it.

When the player initially encounters this event, its card is an Iron Wave 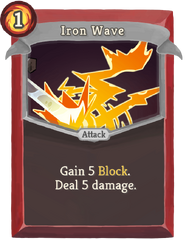 Retrieved from "https://slay-the-spire.fandom.com/wiki/A_Note_For_Yourself?oldid=11859"
Community content is available under CC-BY-SA unless otherwise noted.